Valerie Reyna and Evan Wilhelms developed a new questionnaire for predicting who is likely to engage in risky behaviors, including, unprotected sex and binge drinking. Their questionnaire significantly outperforms 14 other gold-standard measures frequently used in economics and psychology.

The research of Professor Nathan Spreng and his collaborators sheds light on the basal forebrain region, where the degeneration of neural tissue caused by Alzheimer’s disease appears before cognitive and behavioral symptoms emerge.

A new study – the first to look at social media’s effect on memory – suggests posting personal experiences on social media makes those events much easier to recall.

Financial exploitation of older people by those who should be protecting them results in devastating health, emotional and psychological consequences. International elder abuse experts met at Weill Cornell Medicine to map out a strategy for conducting research on this problem.

Childhood poverty can cause significant psychological deficits in adulthood, according to a sweeping new study by Professor Gary Evans. The research, conducted by tracking participants over a 15-year period, is the first to show this damage occurs over time and in a broad range of ways.

Camille Sims '15 says fate brought her to Cornell and the Department of Human Development. And now it has propelled her to reign as Miss New York and to finish second runner-up in September's Miss America competition.

David Garavito, graduate student in the Law, Psychology, and Human Development Program, under the supervision of Dr. Valerie Reyna, is working with communities in New York and around the country with support from an Engaged Cornell grant for student research. He is working with coaches and student athletes to study the effects of concussions on decision making about risks.

ARTICLES ON THE WEB

Alzheimer’s early tell: The language of authors who suffered from dementia has a story for the rest of us

Adrienne Day writes about how Barbara Lust, professor in Human Development, and other researchers are studying changes in language patterns in early Alzheimer’s disease.

Listen to Associate Professor Corinna Loeckenhoff discuss self-continuity, or our perceived connections with our past and future selves.

Hear Professor Adam Anderson talk about his research in the podcast, "Brain waves: The science of emotion" for The Guardian. 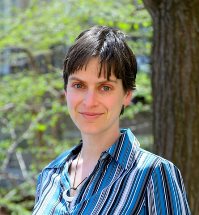 Are you living in the past or the future?

Corinna Loeckenhoff, Associate Professor of Human Development at Cornell University, delves into whether our age determines where our mind may be.

Dr. Loeckenhoff received her undergraduate degree from the University of Marburg, Germany and her Ph.D. from Stanford University. She completed a post-doctoral fellowship in the intramural research program of the National Institute on Aging before joining Cornell University in 2009. She was recognized as a Rising Star by the Association for Psychological Science in 2011 and received the Margret M. and Paul B. Baltes Foundation Award in Behavioral and Social Gerontology from the Gerontological Society of America in 2014. In 2013, her efforts in teaching gerontology were honored by a SUNY Chancellors Award for Teaching Excellence.

Research conducted with:  Joshua Rutt, a former graduate student who is now a postdoctoral researcher at the University of Zurich. https://www.linkedin.com/in/joshuarutt

These findings have practical implications: Prior studies have found that people who feel less connected to their future selves are worse at financial planning and more likely to behave in ways that jeopardize their future. At the same time, feeling immersed in an extended present could lead people to resist change and turn down promising opportunities.

So it turns out that who we are depends on where we have been and where we are going, and regardless of our age we should try to balance a sense of continuity with flexibility and openness for change.